ABSTRACT
A consequence of the quantum mechanical uncertainty principle is that one may not discuss the path or “trajectory” that a quantum particle takes, because any measurement of position irrevocably disturbs the momentum, and vice versa. Using weak measurements, however, it is possible to operationally define a set of trajectories for an ensemble of quantum particles. We sent single photons emitted by a quantum dot through a double-slit interferometer and reconstructed these trajectories by performing a weak measurement of the photon momentum, postselected according to the result of a strong measurement of photon position in a series of planes. The results provide an observationally grounded description of the propagation of subensembles of quantum particles in a two-slit interferometer.

Part of their results is shown below 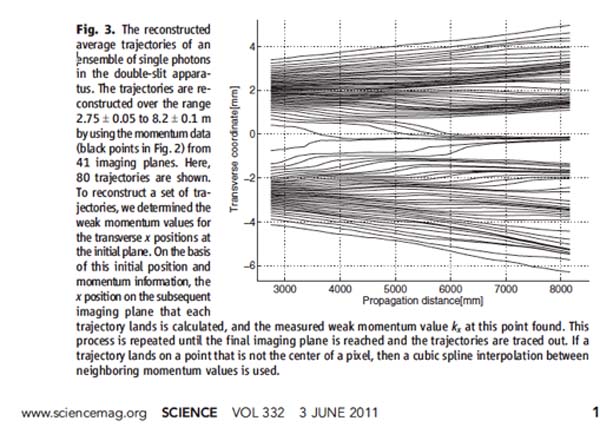 These “trajectories” may be compared with calculations of Bohm trajectories for a two slit interferometer twenty years ago ( x and y scales are different).